You can find all medical exam notifications on this page as and when it published by relative exam authorities.
Posted by Aakash Institute / Aakash IIT JEE at 10:57 PM No comments:

AIPMT 2015 Re-Exam was organized on 25-July 2015 by CBSE across India. Aakash Institute wishes to all AIPMT exam participants to get success.

Students can also see the AIPMT-2015 Cut-off as official announcement made by CBSE after result declaration.

To get AIPMT-Topper and other top rankers of Aakash Institute, one can reach us at our AIPMT Result page @ www.aakash.ac.in:: CLICK-HERE 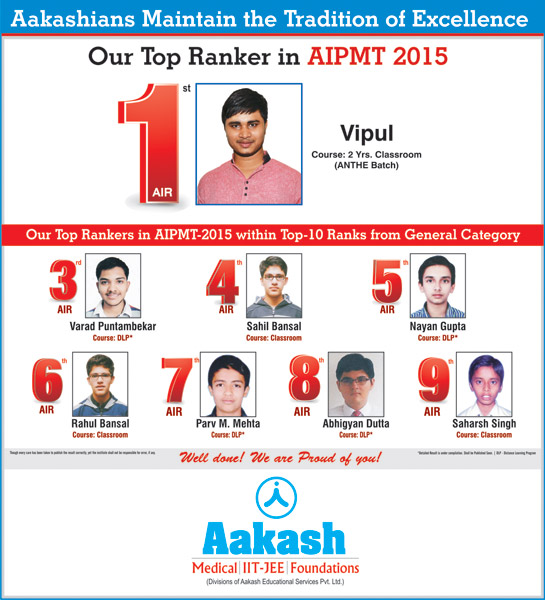 Today, CBSE has released Admit Card for AIPMT Re-Exam 2015 which was re-conducted on 25th-July 2015.

Now, its high time to make sure that your preparation and revision is up to the mark to crack AIPMT Re-Exam.

This test series is prepared by Aakash expert faculties and contains 12 tests where you can check your part-wise preparation and improve your confidence in step-by-step.

And in last one week test your complete performance in 4 different AIPMT-Level online tests based on complete syllabus.

Medical aspirants have been eager to find a quick way to revise the whole course syllabus which they have initially prepared for the AIPMT exam on 3rd-May.

Majority of the students may be ignorant of the syllabus studied after giving an exam, due to which they might end up losing track of the learnt content.

Recently, an order has been rolled out by Supreme Court which declared that the AIPMT exam be re-conducted by CBSE on 25th-July 2015. Ever since, students have been curious in looking for a quick alternate way to recover & revise the syllabus.

Several institutes have launched crash courses for the AIPMT re-test, however we at Aakash Institute strongly believe that students can be benefited with an online test series course than a crash course.

Therefore, Aakash has launched an Online Test-Series Course for AIPMT-2015 Retest Exam. With the help of this test series, students can revise all the important concepts and gain confidence that will help them crack the AIPMT re-test.

1. Students can revive their problem solving ability and improve their speed and quick response time with this test-series course.
2. One can easily identify his problem areas and can focus on specific concepts/subjects to increase competitive potential in comparison to other test takers.
3. No wastage of time at this stage, as students shall revise the syllabus already learnt before.
4. Students who joined crash courses at other institutes can at any time enroll for the Online Test-Series Course as one can attempt this course from home any time.
5. The course might have started few days back, but students can still enroll and attempt the tests. They can find their All India Ranks (AIR) any time before the last date of the course, which is 23-July 2015.
6. The course is available online which allows students to attempt listed tests till 23rd-July.However, the course is available till 21st-July only for purchase.

What are you waiting for? Get started today if you haven’t enrolled yourself for this course:

A good news for you all that Aakash has already been launched Online Test-Series Course to prepare and crack AIPMT-2015 Re-Exam which is going to be conducted on 25th-July by CBSE as ordered by SC.

This Online Test Series Course contains 12-Tests out of which 8-Tests are on Part-wise syllabus & 4-Tests are on Complete syllabus.

Test-Series course is available online till 23rd-July 2015 to attempt. Students should join Aakash Online Test Series Course as soon as possible to revise their preparation. All 12 tests will be provided to each students to brush-up and boost their confidence.

Those students who join this course earlier will be able to revise the whole course within time and will improve their problem solving ability to crack AIPMT Re-Exam 2015.

Join Aakash Online Test-Series Course as soon as possible to get this course benefit.

Best of Luck for 25th-July AIPMT Re-Exam.
Posted by Aakash Institute / Aakash IIT JEE at 4:48 AM No comments:

AIIMS MBBS 2015 Results has been Declared on 18-June

Congratulation to All AIIMS Exam 2015 Participants!

AIIMS MBBS Results 2015 has already been declared by All India Institute of Medical Sciences (AIIMS) Delhi on 18-June-2015. Participated candidates can check their results at below given link.

Aakashians maintain the tradition of excellence and create history in AIIMS 2015 Exam and Bagged Top-3 Ranks. 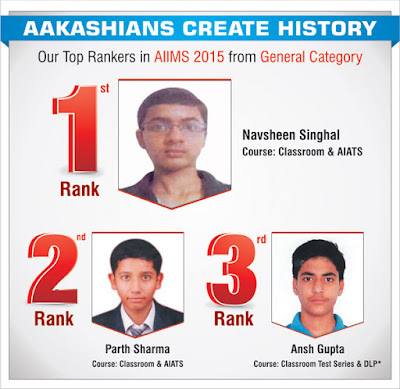 Reconducting the All India Pre-Medical Test examination, which saw large scale irregularities like leakage of answer keys, would be the "last resort", the Supreme Court said on Thursday and asked Haryana police to track down the beneficiaries.

"We are sitting with an open mind. We will decide it...So far as conducting re-examination is concerned, it is the last resort only," a vacation bench of Justices A.K. Sikri and U.U. Lalit said without ruling out re-conduct of AIPMT as demanded by some parents.

During the hearing, it also observed "why should six lakh people be asked to take up the examination all over again and we should try to find out the number of beneficiaries."

The court asked the Special Investigation Team (SIT) of Haryana police to trace out the actual numbers of beneficiaries of alleged irregularities in the test so that "wheat can be separated from chaff".

It also directed the law enforcement agencies of other states, mobile service providing companies to assist Haryana police in the investigation and posted the matters for May 26.

Additional Solicitor General Maninder Singh, appearing for the Central Board of Secondary Education (CBSE), said “let us not magnify the problem and we should focus on the real issue."

The ASG further said the court should keep in mind the fact that six lakh students have taken this examination.

To this, the bench said "We are conscious of all this."

Meanwhile, Haryana police also filed the status report giving details of the probe conducted so far and said six persons have been arrested till date.

One of the officers told the court that around 1100 hours of May 3 when the tests were being conducted, the police got the information that some doctors were getting the question papers leaked.

Later, the answer keys of 123 questions were transmitted through 75 mobile phones in different states, he said, adding that calls were made to states like Bihar, Jharkhand, Rajasthan and Haryana.

The SIM cards, purchased a day before the tests, were de-activated soon after the examination was over, the officer said, adding that around 700 candidates were supplied answers "electronically in examination halls across the country".

The bench then said the mobile service providers could help the police in locating the actual beneficiaries and asked how much time it would need to get the number of end-users.

Expressing unhappiness over the irregularities, it said "You (CBSE) will have to put jammers and everything in place. You just imagine the level of frustration among the students."

"Law breakers are always ahead of lawmakers," the ASG said.

Earlier, the court had issued notices to the Centre, CBSE, Medical Council of India and Haryana on the pleas seeking re-conduct of the AIPMT on grounds of alleged large scale irregularities.

One of the petitions, filed by Tanvi Sarwal through lawyer Prashant Bhushan, said the investigation carried out by the SIT of Haryana into alleged leak of answer keys has revealed that the accused gang operated in different states including Bihar, Uttar Pradesh and Rajasthan.

Citing news reports, it alleged that the examination conducted on May 3 stood vitiated in the light of police probe carried out in several states, which suggest widespread ramification of the alleged leak of answer keys.

It also said the "counselling/admission" on the basis of alleged "vitiated examination" will violate Articles 14 and 21 of the Constitution with respect to genuine candidates, claiming that at least 90 leaked answer keys were transmitted to candidates in consideration of Rs. 15-20 lakh.

It also referred to Shrikant Jadhav, Inspector General of Police, Haryana who has stated that the exam system has failed and may deprive genuine students from getting admission in medical institutions.

Source: www.TheHindu.com
Posted by Aakash Institute / Aakash IIT JEE at 5:17 AM No comments:

AIPMT 2015 Entrance Exam is organized on 03-May 2015 by CBSE across India. Participating students are much crazy to know about Answers-key, Text or Video Solutions, Expected Ranks and Cut-off with Question-Paper analysis by Experts.

The All-India Pre-Medical Test (AIPMT) is a major entrance test for admission to MBBS and BDS courses in the country.

This year’s AIPMT would be conducted by the Central Board of Secondary Education (CBSE), for the academic session 2015-16. This test is being conducted for the 15% merit positions in the medical/dental colleges in India.

The three-hour test will consist of one paper containing 180 objective type questions (four options with single correct answer) from physics, chemistry and biology. There are also state governments/universities/institutions voluntarily participating in the test to use its merit list for ­admissions.

The CBSE will prepare a list of successful candidates of on the basis of the eligibility criteria provided by the Medical Council of India.

Advising candidates on how to crack each section, Aakash Chaudhry, director, Aakash Educational Services Ltd, says: "While attempting the physics section, start with questions based on the Class 12 syllabus first followed by questions on mechanical properties of solids and fluids, heat and sound. Attempt questions based on the topic mechanics last of all. Candidates can skip lengthy questions in the first attempt. For instance, questions on Newton's laws or rotational dynamics can be dealt with later. Also, if numerical values are not very close to the options given, go for a quick and approximate calculation."

Students should devote the maximum time to revising formulae. All graphs given in the NCERT book should be revised, especially in the chapter on semiconductor electronics.

"For chemistry, start with those questions which are direct and don’t involve lengthy calculations. Even if you find the initial questions difficult, don’t panic as there will be easy questions too. Read the statements of the questions carefully. Read all the options before marking the answers. The chapter on chemical bonding is the most important of all in physical chemistry. Coordination compounds, the ‘d and f block’ elements are important chapters in inorganic chemistry. Reaction intermediates, inductive and electromeric effects should not be left out in organic chemistry," suggests Chaudhry.

Students must keep in mind the weightage of each portion of the syllabus and revise accordingly. Students should give special emphasis to the diagrams in biology.

Human physiology, biomolecules, genetics and biotechnology are important topics. Do not go for the lengthy questions first and try questions based on numericals in the end, adds Chaudhry.